Almost every object in Ember.js is derived from a common object: Ember.Object. This object is used as the basis for views, controllers, models, and even the application itself.

It's almost as simple to create a new Ember.Object as a plain Javascript object:

The object literal that is optionally passed to Ember.Object.create() defines properties directly on the instantiated object, not unlike the vanilla object. However, upon inspection in your console, you can see there's quite a bit more going on behind the scenes of the Ember object: 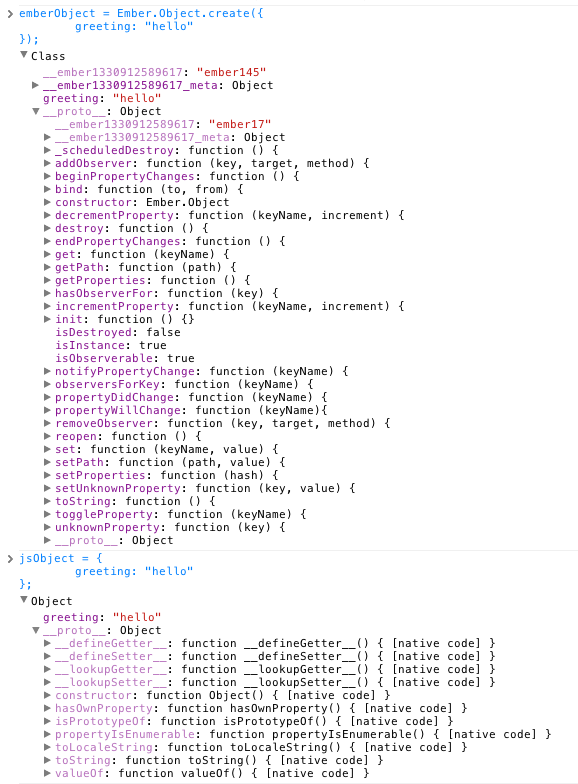 It would take a long tour of the Ember source to explore all the properties of even such a simple Ember object. Needless to say, it's all required for Ember to enable bindings, observers, and more. Although it looks like quite a bit of overhead, the complexity of the Ember object is contained almost entirely in its prototype (Ember.Object.prototype) and not within the object instance.

To go beyond vanilla Ember objects, you can extend Ember.Object or any of its descendents to create your own classes:

Important: the object literal that is passed as an argument to extend() defines properties for the *prototype** of objects that will be instantiated by the class.*

Important: remember that the object literal passed to create() defines properties of the *instantiated object** (not its prototype).*

And let's inspect our new person:

Initialization (and a common mistake!)

One of the most common mistakes for beginners to Ember is to think they're passing properties to an instance instead of a prototype. For example:

Why did this chromosomal mutation happen? The problem started when we added an array to our prototype when defining the Person class. This array was then shared with each object instantiated from Person.

How should we have handled this?

When declaring objects or arrays in your classes, you'll typically want to initialize them along with each instance in the init() function. In this way, each of your objects will receive its own unique instances of objects and arrays. Also remember to call this._super() from within init() so that init() will be called all the way up the prototype chain.

Of course, there's nothing wrong with keeping objects or arrays directly in your prototypes if they are meant to remain constant across instances. In fact, one common pattern is to keep a default setting in the prototype that's then duplicated for each instance in init(). These kinds of patterns are easy to implement once you realize how objects are created and initialized.

Want to play more with inheritance and initialization? I've extended this example on jsFiddle.

You can easily add properties to Ember classes after they've been defined using reopen():

Specifically, reopen() modifies the prototype that will be used for objects instantiated by a class.

If you want to add properties directly to a class, use reopenClass():

One useful pattern is to define class methods for finding and/or creating objects.

While extending classes in a hierarchical fashion often works well, there is a tendency to end up with classes such as MaleLeftHandedPetOwnersOfPoodles. Trying to munge together a bunch of separate concerns in a single class can get messy. Ember's answer to this problem is Ember.Mixin. Here it is in action:

In this example, we're merging a number of separate concerns in a single object. Joe is both a PetOwner and a Male, and has other traits such as an age and name. He not only has a pet, but that pet even has a name.

The separate concerns are each represented by an Ember.Mixin. The joe object is created as a merger of the PetOwner and Male mixins, as well an object literal that represents instance properties. Mixins get initialized in the order in which they are passed to create(), which allows joe to set his pet's name after PetOwner has created that pet.

Want to play more with this example? It's also on jsFiddle.

Mixins aren't limited to objects that you create(). They can also be used with extend(), reopen(), and reopenClass.

Furthermore, there's a suite of useful mixins built right into Ember core. Do you want your object to be enumerable? Mix in Ember.Enumerable. Want to create a view that triggers an action? Extend it with Ember.TargetActionSupport.

I think you'll find that by separating lateral concerns in mixins, and hierarchical concerns with extend(), you can build a very flexible architecture for your Ember apps.

Any questions or suggestions for further Ember posts? Please feel free to comment below -- Dan